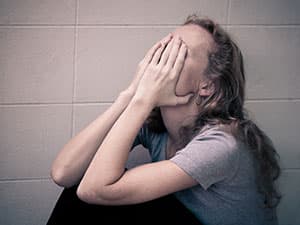 Anorexia nervosa (commonly referred to as anorexia) is a serious mental health condition that can drastically impair a person’s physical health. When a person severely restricts food intake and limits or eliminates vital nutrients, their body’s systems can begin to slow down, leading to several potential short- and long-term effects – many of which can be fatal.

Anorexia has one of the highest death rates of any mental illness, claiming the lives of between 5-20% of the people who suffer from it.1 Recognizing the signs and symptoms of anorexia can help a person get treatment early, which increases the chance of recovery.

This article answers the following frequently asked questions about anorexia:

Anorexia nervosa is an eating disorder that causes people to lose an unhealthy amount of weight. It is characterized by a fear of gaining weight even in those who are already underweight or may be dieting and exercising to lose weight.

Anorexia is far more common in females. But it can occur in males as well. It is a severe illness that can be life-threatening if not treated.1,2

Many celebrities have battled anorexia. Read about a few of them below.

6 Celebrities with Anorexia from recoverybrands

A person must meet certain criteria to be officially diagnosed with anorexia. The Diagnostic and Statistical Manual of Mental Disorders, 5th Ed. (DSM-V) outlines the following 3 criteria:3

A person with anorexia usually displays several warning signs. These include the following anorexia symptoms:1,2,4, 6

If you have observed these symptoms in yourself or someone else, call our helpline at . 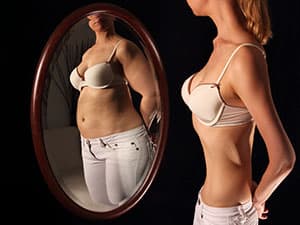 The exact causes of anorexia aren’t fully understood. It is complex illness that may have many contributing factors.

Certain risk factors can predispose a person to developing anorexia. These include:1, 2, 5, 6, 7

Anorexia causes many physical complications and health problems. Many anorexia effects can be severe and even life-threatening.

Some of the short-term effects of anorexia include:1,4,5

If you or someone you love is experiencing any of the above anorexia effects, seek help as soon as possible. According to experts, seeking treatment early on greatly increase a person’s chance of recovery and can significantly reduce the risk of more serious complications.1

If left untreated, a person with anorexia can suffer many long-term health effects, such as:1,4,5

Treatment can help reverse some of the effects of anorexia and help you get your life back. Call to get more information about rehab programs. 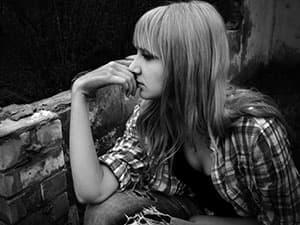 In addition to the physical health problems that anorexia causes, a person may have other anorexia side effects, such as:

Though perhaps not as dire as anorexia’s health complications, these social, emotional, and behavioral changes can have significant negative impacts on a person’s life.

Many people with anorexia suffer from depression and may exhibit symptoms such as:

Many of these symptoms may be related to semi-starvation or from being heavily focused on eating and weight.

Depression and anorexia can influence each other. A person may have depression, which leads to anorexia. Alternatively, a person suffering from anorexia may develop depression because of their illness.

The following are some facts and statistics about anorexia and how many people are affected.

Getting Help for Anorexia

If you or someone you love is struggling with anorexia, there is hope. Treatment can help people gain weight and restore health as well as address underlying psychological causes.4

Treatment can be difficult, and many people relapse. But long-term studies indicate that approximately 50-70% of people recover from anorexia. The most effective treatment consists of a combination of medicine, psychotherapy, and family therapy.6

To learn more about anorexia treatment options for yourself or your loved one, contact our recovery support team for information and resources at .